An efficient solution for the future

The ambitious but necessary climate targets do not only require a turnaround in energy policy but also in transport policy.

Thus, the industry is working at the system’s efficiency at high pressure, in order to improve performance and quality and to strengthen the competitiveness of combined transport. Simultaneously, the industry also needs political support as well as the support of decision-makers to push intermodal transport in Austria and Europe. 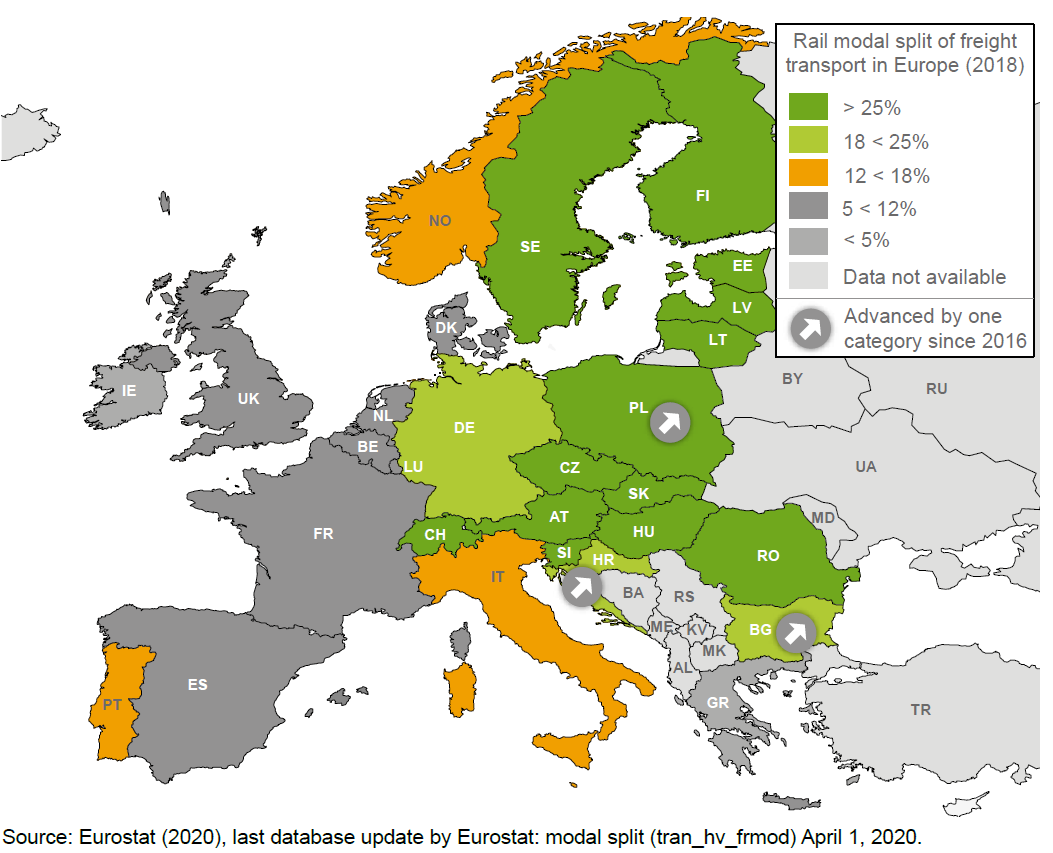 In Europe, Austria compares favourably in terms of combined transport. To strengthen the potential, however, more favourable conditions must be created. © Eurostat (2020)

Many important target markets within Europe do not yet have a sufficient rail infrastructure. The infrastructure has therefor got to be expanded in areas with a shortage. The Austrian rail network is little affected by this, but on a European scale the Austrian intermodal industry needs support in this matter.

Markets are too fast paced for today’s rigid system of booking train paths early. The rail infrastructure capacity alignment process must become more flexible and available digitally, in order to meet the economy’s transport requirements for the necessary mobility.

Digitalisation on a European level

While digitalisation of combined traffic is on the advance, processes are still too often characterised by system discontinuities and manual steps. This is particularly true for legally prescribed processes. For digitalisation to achieve the desired effect for efficiency and flexibility, digital systems and Europe-wide regulations must be compatible.

Funding of terminal expansions in Europe

The efficiency of combined transport does ultimately also rely on the terminals as a trans-shipment centre for containers. The financing of measures to enhance the capacity and quality of Europe’s terminals must be continued. This too is an international task.

Austria already has a large variety of different funding for combined traffic in the transport policy context. For example, the 44to-regulation for lead-up and follow-up, through which lorries are allowed to have a higher permissible total weight, or the tax advantages for vehicles in unaccompanied combined traffic, or the financial support of investments and the operation of combined transport.

These measures are a good start but must be further extended in a target-oriented way. The term “nearest technically feasible terminal” must particularly be redesigned in the regulations regarding flexibility and practicality. The nearest terminal is not necessarily the most suitable one. Apart from the technical infrastructure, the schedule must be suitable for the transport order. If there’s no train leaving the nearest technically feasible terminal at the required time, transport via combined transport can either not be achieved or the combined transport business must accept drawbacks and forgo funding components.

A national UCT network with regular rail links ought to be developed not only as a link for international transport but also for the sake of environmentally friendly national connectivity. The network’s design must ensure even distribution of risk among users and constructors of the network.

As measured by transport performance (tkm: ton per kilometre), the increase during that period is at 34%. In European combined transport, the average transport route accounts for about 330 kilometres.

In total, around 280 million tons of goods, loaded into a total of 25,40 million TEU (20ft containers), were transported via combined transport in Europe in 2018. This amounts to a continuous line of containers of about 154.000 kilometres – spanning earth four times.

At 40%, the share of combined transport in rail freight transport in Austria is almost double the European average and has increased tremendously over the past years. On one hand, this can be traced to transit traffic.

However, a major part of this development is due to the engagement of domestic entrepreneurs and the support in transport policy. Austria can therefore safely be named at the forefront of the European rail transport.

Recording one of the highest shares within the EU, comparable to Switzerland, Austria’s share of rail traffic  is at 30%.

It is understood that European overland transport will further gain about 30% until 2030. If modal split, in the form of combined transport, stayed the same, this would lead to an increase of around 570 million tkm of road freight transport. This number is roughly comparable to the current annual transport capacity of Germany.

A need for availability of infrastructure and efficiency enhancement

To reach the climate goals, rail freight transport – and as such, combined transport – needs to play a bigger role in the future. This assumes the availability of infrastructure, as well as a massive enhancement in efficiency on rail.

However, it must be assumed that future freight transport will no longer increase according to economic growth. To reach the ambitious climate goals, structural changes will have to be taken into account.

The transport sector as a factor for climate goals

Essentially, all national environmental goals have an immediate impact on the transport sector, particularly as road freight transport is responsible for a major part of greenhouse emissions. The only way to achieve a reduction of emissions is to

The 55% reduction of greenhouse emissions until 2030 and the climate neutrality of the EU until 2050 set an ambitious target.

According to the EU transport White Paper, 50% of all road freight transport over 300 kilometres should be transferred to rail- or ship-transport until 2050. In 2030, the share should already be 30%.

According to the national mobility plan, Austria strives for climate neutrality in the transport sector, including freight transport, until 2040.

Without people, services are impossible. Well-trained staff on all levels is the key for an efficient provision of services. This is also true for combined transport. The intermodal transport chain is more complex than other kinds of freight transport. Know-how and specific professional experience are therefore a key to success.

Combinet is ready for collaboration with official authorities, in order to embed topics such as rail freight transport and combined transport in the curricula for the relevant professions.

Find out more about a career in combined transport.